Forums
Authentication: Visitor
OUTDATED DATABASE, NOT IN USE ANYMORE! 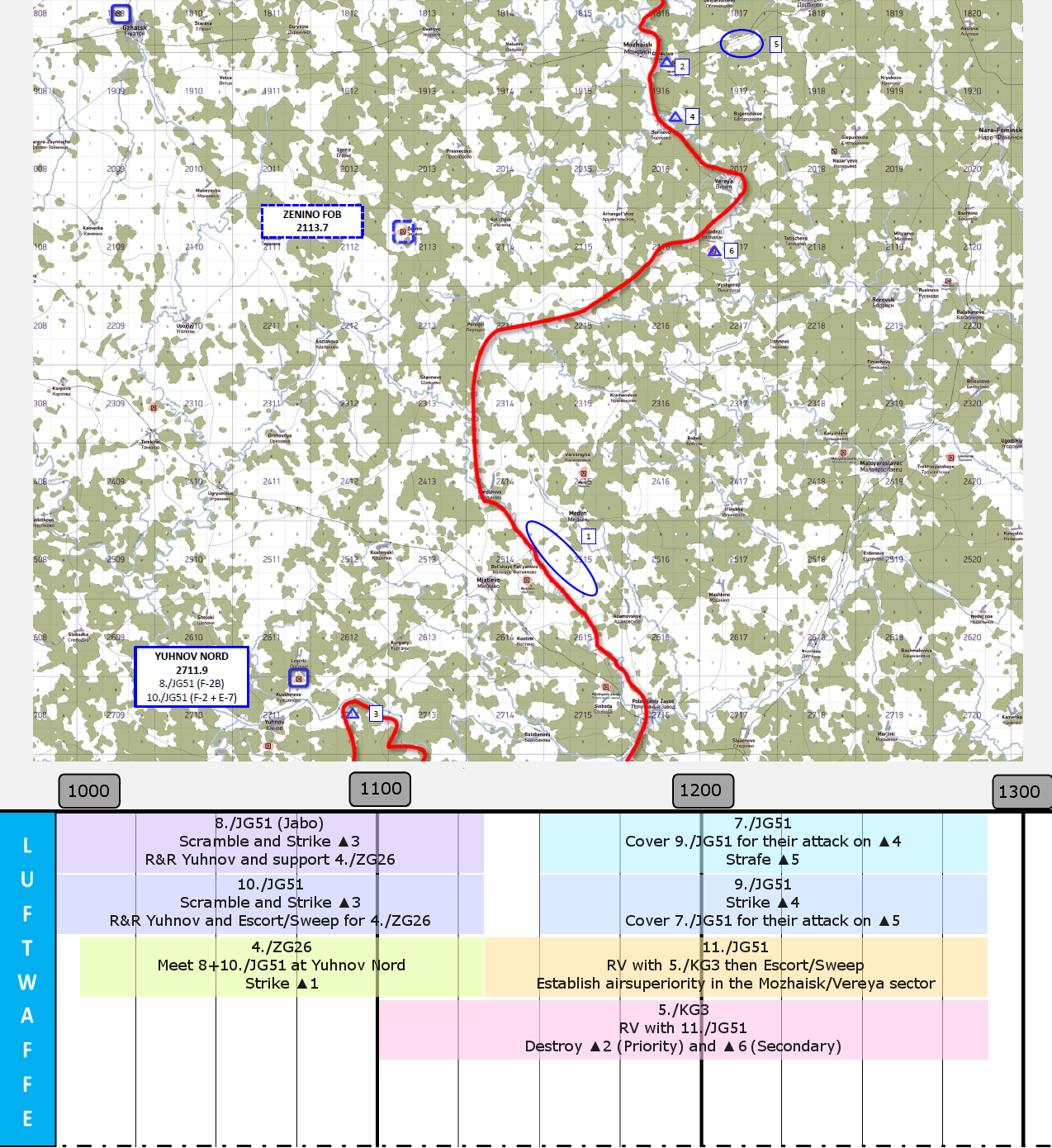 The Soviet advance West of Rzhev (1005) continues and their forces are threatening to encircle the city while also posing a grave threat to Army Group Centre’s major supply head at Vyazma (2205) and communications from there back to Smolensk. Their advance is currently being held around Sychevka but further south the advance threatens to overrun Dugino AF (1705.7). 9th Army is fighting to hold these forces in check with local counterattacks and Rzhev has been declared a fortress. In the centre, the enemy continues to drive towards Mozhaisk (1816). Further south, 4th Army is digging in to protect Mjatlevo (2514) and contain Soviet drives that would threaten Vyzma from the south east. Fliegerkorps assets remain concentrated to counter the threats in the centre sector and support 4th army and 4th Panzer army’s defensive actions.
13th Korps of 4th Army are digging in around Mjatlevo, while the airfield is being evacuated. E and SE of Vereya, 20th Korps are holding against enemy attacks, to halt the envelopment of Mozhaisk, which is now directly contested, with the airfield to the East having fallen yesterday. Elsewhere, preparations are being made to fortify the Königsberg line in order to stop the Soviet advance West. In the south, 43rd Korps elements have been driven back with an enemy spearhead now threatening Yuhnov.

Concentrate air operations to protect friendly ground forces and disrupt enemy ground concentrations. The priority is air to ground attack and all possible units should be so employed. However, with friendly defensive preparations being heavily attacked, maintaining some patrols is also imperative. Even then, such missions are to actively take strafing opportunities as they arise along with attempts to seek out the enemy air forces.

Soviet small arms/HMG flak is reported as heavy over their forward units in both the Rzhev and Mjatlevo sectors. Some larger calibre flak has been encountered close to front lines but is otherwise mostly concentrated around strategic points/cities and airfields. Heavy flak is reported at Maloyaroslavec, and most major towns in the central sector.
The high threat of dense small arms fire at lower altitudes should be taken into account in mission planning and attack profiles. Own forces’ flak remains weak due to losses in equipment and the severe weather. All active enemy airfields should be considered as possible flak concentrations and areas of air activity. All airfields east of our known lines can be considered active.
The Soviets have recently overrun Nazar’yevo, Medyn and Kolodezi airfields and are already using them as FOBs and even more permanent bases.

All units have to provide regular mission progress updates to Freya and all other friendly units. As there won't be active guidance from Freya for this mission coordinate with the relevant friendly units yourself.

8./JG51 (Waldkauz) Connect 1000 | Take off 1010
Your airfield is coming under attack by Soviet forces from the South East (2712.5). Every effort must be made to stop this assault in its tracks. Use the close proximity of your MOB to rearm, refuel and repair and launch as many sorties as possible. After completing this task escort/support 4./ZG26 during their mission North East/East of Mjatlevo (2514.9-2515.2). Return to base by 1120 hrs at the latest.

10./JG51 (Bussard) Connect 1000 | Take off 1015
Support 8./JG51 during their mission South East of your collective airfield (2712.5) by also attacking ground targets in the area. Use the close proximity of your MOB to rearm, refuel and repair and make good use of the E-7 airframes allocated to your Staffel. Afterwards copy 8./JG51's second task by escorting/supporting 4./ZG26. Return to base by 1120 hrs at the latest.

9./JG51 (Kondor) Connect 1130 | Take off 1140
Proceed towards Borisovo and provide close air support for our own troops North East of there (1916.2/3) by making use of the E-7 airframes allocated to your Staffel. 7./JG51 will cover you during your attack, afterwards it's your turn to protect them during their strafing run. Return to base by 1245 hrs at the latest.

FOBs with capacity to refuel and rearm all aircraft; damaged aircraft may not be replaced:
Zenino (2113.7)

Replacement aircraft are not widely available – damaged aircraft can only be replaced if landing at their original MOB. Those bases which can refuel and rearm (but not replace) aircraft not originally based there are as below. Due to logistic and transport difficulties, aircraft landing or coming down away from active MOBs/FOBs/Diversions will have to abandoned and considered lost. (ROE) All airfields are considered vulnerable, with the exception of Dugino and Dvoevka.
The standard ‘one life per mission’ applies – being killed or wounded terminates the individual pilot’s participation for the evening IAW the ROE. Landing or coming down in a damaged aircraft away from its starting MOB will also terminate the pilot’s participation.