Moderator: Board of Directors 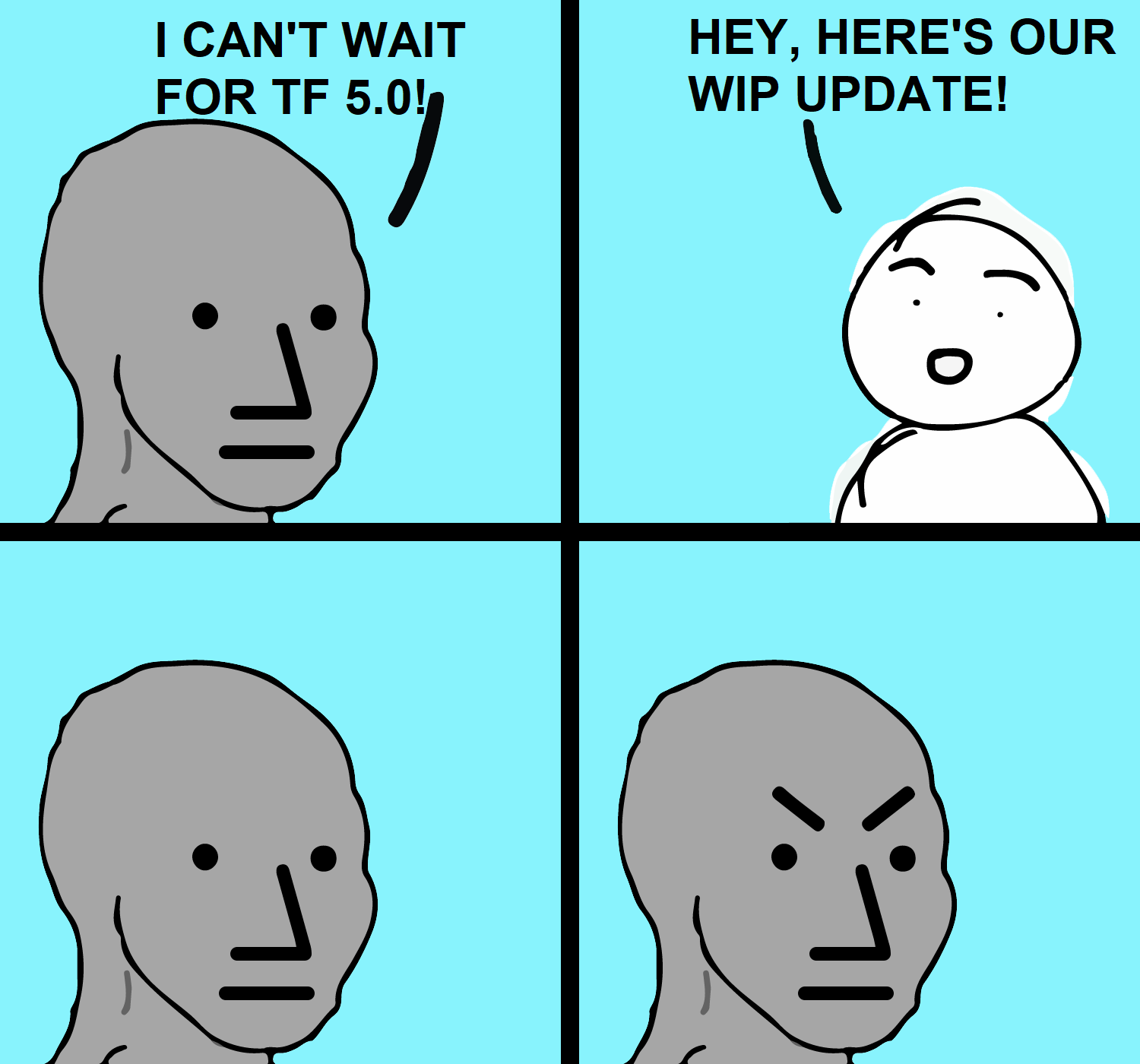 Repugnant is a creature who would squander the ability to lift an eye to heaven, conscious of his fleeting time here.
Top

Wolverines post is pretty good I would +1 it if i could but at the end of the day TF 5 has been around the corner for like what 4 years now and the only things we have gotten is small bug fixes and endless photos. ( you can say blitz is something totally new) but in the end it literally is just TF patches all ready installed with a couple of more bug fixes added in. When they were a mod team yeah you could say well hey it's just a bunch of dudes trying to make the game better (but hey I can still call them a shit mod team by my own judgement) but they aren't anymore they are a (to use the term loosely) a company and that doesn't change my opinion they were a shit mod team and now they are just a shit game development studio and i will treat them as any other game studio.

Being brutally honest Jason Williams made the biggest mistake of his life letting TFS do anything with Cliffs at all should have just told steam to pull it but I guess anything that brings in more money for 1C to fund further games is a great idea.
Last edited by Kildren on Mon Oct 28, 2019 6:22 pm, edited 1 time in total.
1

Speak to me about joining the ACG Pilots Union
Top

Please note. The previous developers were NOT 1C. That was Maddox games. Maddox helped TF to acquire the source code. 1C never developed IL2 and in fact they stopped making games (closed their inhouse studio) after they backstabbed and closed the funding of 'Nuclear Union' circa 2012-13. 1C are only publishers. And not a good one in my opinion. The early release of CloD speaks volumes about the publisher already. 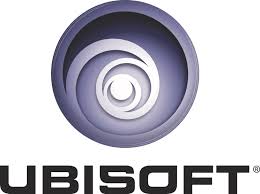 Speak to me about joining the ACG Pilots Union
Top

My apologies. I meant 1C:Maddox Games. 1C acquired them as an in house developer and I just used 1C as short hand.

The exact name however isn't really relevant to the point I was trying to make.

I can understand why there's a lot of 'why do people pick on TF so much?' sentiment. It doesn't make much sense without some of the historical context, I think.

I believe back when all this started, there was some active measures taken by the modding team then to isolate and prevent any other mods from being made. I think the argument was 'we want to avoid IL-2 1946 situation with lots of mods and no consensus to keep the community together'. I think IL-2 1946 is doing just fine actually and it's a commentary on that choice in itself that '46 is still enjoyed by a community just as large (or larger?) as the CloD one.

Unfortunately, this led to the situation where only one group had control over the direction of the game since the official developer had abandoned it, essentially making the mod team the new developer. And with the community dwindling, and the online situation the way it was, unless you used the mod, you couldn't play the game (SP was and still is not very functional). If you preferred the original vision of 1C: Maddox Games flight model or whatever, you were basically holding useless code. Only the MOD version was playable online unless you started your own server - which no one would join since they had the MOD version.

Most 'mods' aren't in the business of taking the original game and changing its intrinsic qualities, in this case flight model, damage model, AI, etc. They add to it, or convert the assets to make it a game about Star Wars or whatever. If you want to play it, you get it. If a community builds around it, great. The TF group essentially took control over the game people had purchased. A few things were fixed, sure, but mostly a lot of it was altered. Many of the great things people do in CloD today and in the past are and indeed were completely possible with the final code 1C: Maddox Games released, minus an E4 variant I suppose (I'd have to look at what exactly was in the last 1C: Maddox Games release).

Just so that idea makes sense, in the vast majority of 'modded' games, if I like the original game I can still play it. Because CloD was so broken in SP that MP was the only real option, and because the only servers that had anyone playing on them were running the MOD, it was essentially unfeasible if not impossible to get a critical mass of people willing to play the unmodded game.

I'm not saying anyone's got any ulterior motives in any of this (though some have made those claims). Again, maybe just trying to bridge the gap between people who are seemingly 'anti-tf' and those who aren't? TF basically came out with their opinion of the base game, but it ended up being the only way to play, and we all know how people handle differences of opinion online....

Not sure if any of the above makes sense.

I've always said that if they could fix the OnBuildingKilled() code, it would be a complete game changer. I came back to CloD after years away from it when it seemed like that might have been done, but alas no.
Last edited by Wolverine on Tue Oct 29, 2019 3:20 am, edited 1 time in total.
Virtual No.401 Squadron - XO
Top

Thank you for your posts, Wolverine.

Cule, I apologize, I don't know you but you don't have a clue.

Greetings to all of you, No.64 especially

And, no I have no intention in firing up this sim again, after TFS ( that I respected very much until 4.5) f^cked up the FMs.
(input filtering , CG.... ).
I wish them good luck anyway, but that won't help.

Firstly I apologize to anyone that got offended by what I had to say over the course of the last few days regarding TFS,I did not set out to offend anyone.I am,or was,very passionate about our sim,and I realise the fault lies with me,because I have put far too much expectation on TFS to achieve.

However,as time has gone by,the small list of flyable aircraft and game fixes once planned,has grown to such an extent,that I do believe now,by the time TF5 emerges,the majority of this community will have moved on,and their motto 'Keeping The Dream'alive,will alas have no meaning anymore.In my humble opinion,they have given them selves a mountain to climb.They could've made,for example four new flyables and made the critical fixes needed to correct the sim's many faults,just if nothing else,to keep the community alive,but they have taken it upon themselves to take another route.......the ever Grand and ever expanding TF5.

It is this route that they have embarked on,that is the route of my frustrations that I get pissed off with,the list of planned new models and enhancements just seems to get bigger and bigger.

I have been here from the beginning,I make no apologies for that,and so I have been privy to all the statements and updates from TFS that have been put up on this forum by them.

It's their attitude towards our community that I find difficult to respect anymore.......I think they seem to think that this community will be here waiting for them forever,so again,sorry to any snowflakes out there that get offended by this,but this community will not be around forever,interests come and go,and this has been proved on many occasion.

The current fixes to the flight model issues,are without doubt very questionable........for instance the warming up period it now takes to get these aircraft airborne,is just far too tedious.

I was under the impression historically,that these fighter Squadrons could be up and flying within a small four minute window,it now takes four minutes just to warm a COD engine up!.....this just kills any immersion stone dead in it's tracks IMHO......But each to their own,if you enjoy this,then great,personally I would prefer a pre warmed up engine ready to go,far more historic,and far less tedious.

These are only my opinions......so don't get too heated up if,what you've read,you don't agree with,they are I would agree,very negative opinions,but then,I have'nt seen much going on with TFS over the years to make me feel otherwise,sadly.If TFS finally does come good,and finally does deliver the goods,I will be the first in the cue to congratulate them,believe you me,but alas,I think this is going to be one big white elephant........the challenge to TFS is....prove me wrong !

Cule, I apologize, I don't know you but you don't have a clue.

Greetings to all of you, No.64 especially

And, no I have no intention in firing up this sim again, after TFS ( that I respected very much until 4.5) f^cked up the FMs.
(input filtering , CG.... ).
I wish them good luck anyway, but that won't help.

Nice to know you Vranac..

While I am new to ACG, I have been around in IL-2 for more time than I'd like to admit, and I am very aware of the problems people in many forums have with TFS and more so after 4.5 (or rather than TFS, an important individual in TFS and the schemes). Actually I was part of Team fusion for a brief period of time. Don't want to talk about it.

My points were exclusively bound to the environment of making an indie game (partnering with a huge publisher who doesn't finance you is still indie). I work part-time in that sector. If you want to charge at me because I seem to treat TFS with a rather naive and blissfully generous manner after all the nasty bits over the years, missed dates, bans and kicks, you are perfectly entitled to. I wasn't planning on kicking up any dirt. 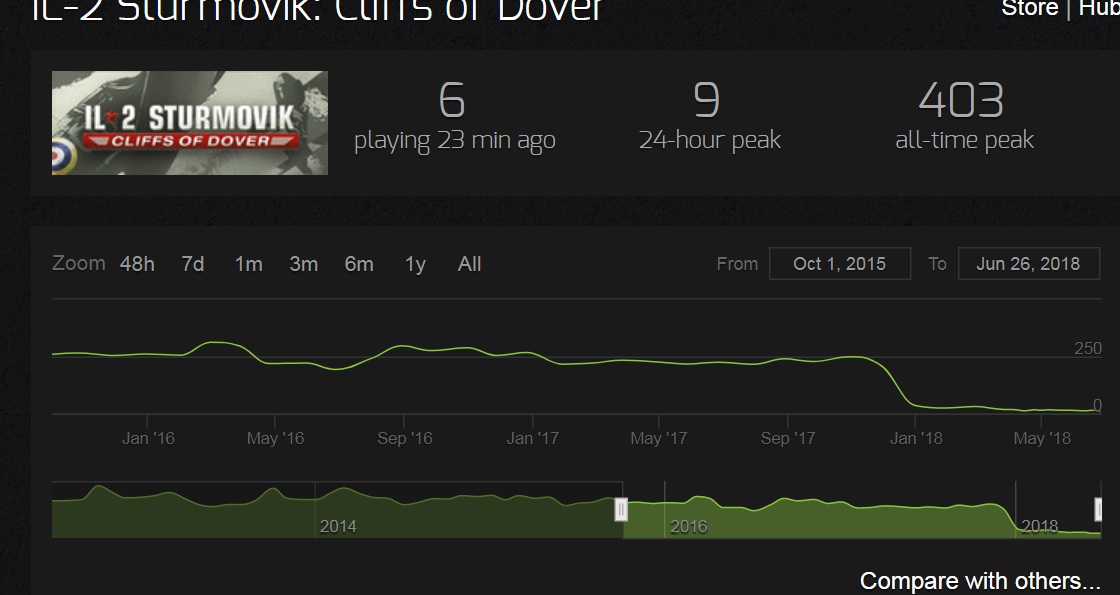 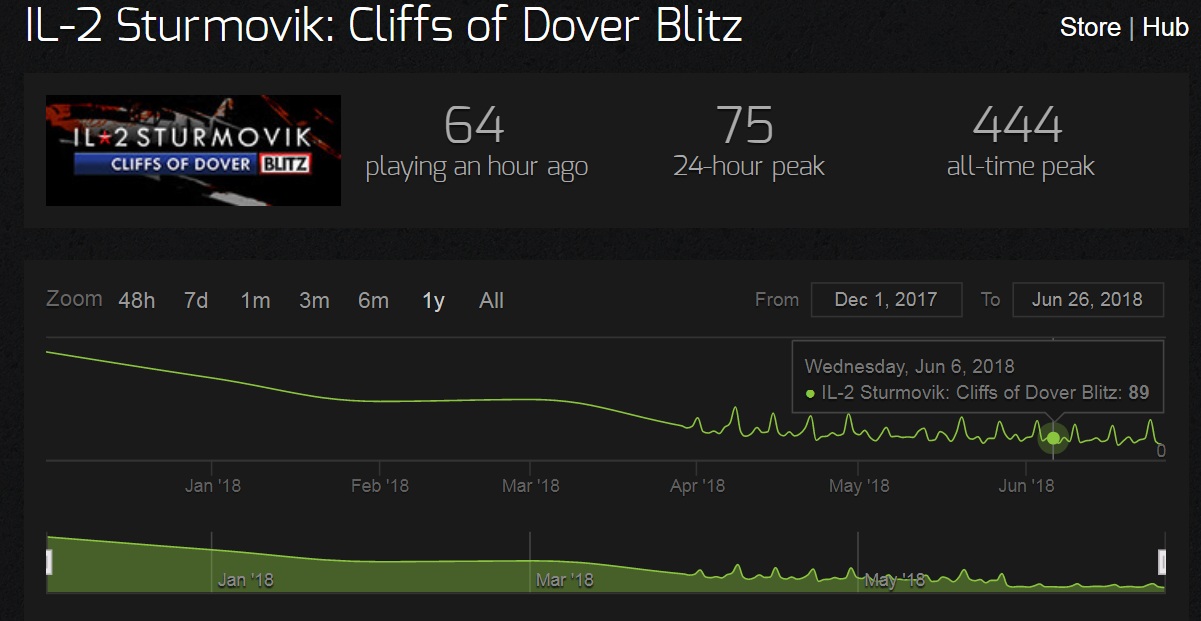 Note: those peaks were from our campaign


I apologize again, I should have been more specific when writing that you don't have a clue.

CloD was financed by 1C, they were not just publishers, they were paying the wages and the bills for that small team that was developing this new engine. That's why they have been able to force the release date prematurely and to put pressure on Oleg to step down before the release (because he didn't want to release the sim prematurely, but he stayed with the team to support them).
There was a hot discussion on a main Russian sim forum, Sukhoi ( that is unfortunately down for years) where Oleg and two main programmers were writing pretty honestly what was going on there. One of them had some issues with Oleg so we could see the 'opposition' also ( he was not satisfied with the wages and working hours, they were partly paid in shares ).
The other dev was coding FMs, AI and netcode in the same time. He stayed with Oleg until the end and he said that he was aware that he couldn't finish all of that because all of these tasks are pretty complicated.

Like I have said, I was a big supporter of TF until they started messing with the original FMs. I'm not talking about CEM even if they managed to mess up that also.

Gawd, been ages since I've been here! Anyway, found this today, you've probably already seen it...