It is the 24th July 1940, the sky is covered with clouds and our runway is wet and muddy due to the heavy rain last night. We, the II./JG26, were assigned to escort a group of Do-17 to their target, a ship convoy north of Manston.
At 1100 we took off but due to the muddy surface we had some take off accidents that caused a big delay because there were aircraft parts lying around on the runway. The three Schwärme of the 6. Staffel (me as leader of Schwarm 1, Hauptmann Trautloft as leader of Schwarm 2 and Oberfeldwebel Rook as leader of Schwarm 3) made contact with the bombers just of the coast of Dunkirk at 1113. Staffel 4. and 5. were following slightly behind.
I led the 6. Staffel into position up high over the bombers at about 5km while the bombers where flying at 3,5km. Only 2 minutes later, just over the middle of the channel on our way north to the ships, I spotted a formation of enemy fighters at our altitude directly ahead flying towards us. Hurricanes!
Most of the went down to attack the bombers but about 5 of them flew past us and turned in behind us. They had a slight advantage in energy since we were still in our climb to altitude.
To shook the Hurricanes off from our tails we dived down onto the Hurricanes that were sitting behind the bombers. Unfortunately the 2. and 3. didn't got away fast enough and had to fight the Hurricanes. I with my Schwarm continued our high speed dive onto the enemies below us. I placed myself behind a Hurricane which was just about to open fire on on of the Do-17 on the right side of the first wave of bombers. I opened fire from all my guns and saw pieces falling apart from the Hurricane while I climbed up again. The Hurricane was diving down like a stone, totally ripped up. This was at 1117 and the position was roughly east of Deal. My trusty wingman Unteroffizier Wiesel, who was on my 5 o'clock, witnessed this victory.
After climbing up over the bombers again we tried to get an overview of the situation. The bombers were under attack and there were many small dogfights around it. In the meantime a flight of Spitfires had joined the action as well.
We looked out for our second Rotte which was led by Hauptgefreiter DaHeld. We got separated during our attack on the Hurricanes. We found them back in the moment where DaHeld called out a loud "Horrido" over the radio. I saw him behind a burning Hurricane that dived straight down. This was at 1120.
The whole fighting area was now stretched and the bombers were mostly clear now. They already suffered some losses but where still on course to the target. I stayed above them with my Schwarm. Occasionally we dived down to chase enemy fighters off of the bombers. No final victories were noticed but at least we scared them off and showed our bombers that they can trust us.
After the bombers had dropped their bombs on the ships, they split up their formation in smaller flights and turned home. The sky looked clear of enemy fighters over the Manston bay, only the Flak tried to shoot us down. But due to the sick and low cloud cover it seems that they had problems to locate us and fired just random into the air.
At 1135 I gave orders to everyone to fly back home. In the same moment I received a call from 4./JG26 Staffelkapitän CoolHand that some of his pilots are engaged in a dogfight with Hurricanes above the coast at Deal. I looked around and spotted them far below us. We were flying at about 5km at this time and the dogfight took place at only 1km. I told them that I'm on my way down to help them and that they should hold out. I fired some shoots on one of the Hurricanes, causing it to break away and run home with streaming coolant. The other enemies turned away as well, the threat was gone. We climbed up again and headed home.
Suddenly we spotted a lone Spitfire far out on the sea, sneaking up behind 4 of our bombers. We gave full speed to attack this sucker. I got some good shoots on him. Unteroffizier Wiesel was a bit too fast and couldn't get into shooting postion. The Spitfire went into a steep climb and I turned around to set up another attack on him when I suddenly saw another 109 going into the Attack. It was Unteroffizier Warjunkie of the third Schwarm of the 6. Staffel. He finally finished the Spitfire off, so I grant this victory to him. This happend at 1140 far out on the sea on the high of Hellfire Corner.
At 1149 we landed back at Marquise. Unfortunately there were still some aircraft parts lying around in the mud on the runway which caused a slightly bent prob on my otherwise undamaged machine. After downing a spitfire with a quick burst over Manston at about 3000 meters we headed for Hawkinge. I was injured by flak on the way but my plane seemed not to be affected. After failing to sight any more enemy fighters we returned to base. My wingman Reinhart landed safely as well having suffered no damage or injuries. He did a great job - stayed on my 4:00 for the entire mission keeping track of me and the enemy very effectively.

Victory Claims:
We took off about 5 past 11 and rendezvoused with the bombers over the channel, north of Dunkirk.
Almost immediately, the bombers came under attack by a gaggle of Hurricanes. We engaged and were able to drive them away or shoot them down.
In the process, I was able to shoot down a Hurricane while it was aligning with one of the bombers of the first group. Some of my bullets may have hit the bomber as well, I'm not sure, but hopefully I haven't hurt anyone in there...
Gruppenführer Major Pitti saw the Hurri go down in Smoke.

As the fight progressed, my crate began to shudder terribly, so I decided to call it a day and turned for home. I landed safely on the Gartenzaun at 11:46.
All in all a very sucessful day! 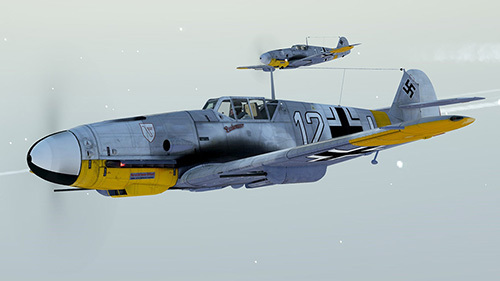 Mission Date: Mission 12: 24th July 1940
Name: Lee
Rank: Gefreiter
Unit: 5./JG26
Aircraft: BF-109 E1
Markings: -+5
Aerodrome: Marquise
Status: Crash Landed on water
Victory Claims: Schwarm 2 of the 5 took of beautifully zigzagging through the rubble of damaged aircrafts on the runway , no plane lost , present company included .
Since take off was challenging for a lot of people , grouping up took longer then usual , which meant we did not pick up enough altitude for the engagement , we have met the readies co alt basically .
Ordered to brake formation and engaged , I knew I am in deep shit .
I attempted to dive to gain Energy just to find out that a spitty is on my six .
I was actually not badly damaged , but for a split second I forgot its an E1 and attempted a steep climb .
Well , that was a mistake .
engine gave up , I saw a distance contact and figured I have nothing to lose .
I shot a burst to his direction and headed towards the Channel , just to find out that the spitty is still on my 6 .
Between his blaze of hot metal , I extended my flaps and he stopped firing ...
I was thinking , how noble it is of him to allow mew to crash land .
Turns out he had some technical issues that kipped him from finishing me off .
Points to work on this week , landings , E1 and dogfights .
Last edited by Lee on Sun Mar 23, 2014 10:43 pm, edited 3 times in total.

had a game/client crash about 5-7 mins after take off,restarted, joined back in.
extra notes - may just be on my end but there seems to be some nasty warping happening in the server time to time.
Top

Name:Cool-Hand
Rank:Lieutenant
Unit:4./Jg26
Aircraft:109E4
Markings:White 9
Aerodrome: Marquis West
Status: Ditched in Channel
Victory Claims: Got caught in a dogfight with Spits, reversed the tables on one but was 3 on 1 so I dove away. When levelling out from the dive, oil splattered all over the windscreen...don't know what really happened, maybe flack. Coasted back as far as I could... made it in sight of France and put the aircraft in the water. Survived the Battle of France and Kanalkampf, no deaths yet but a few close calls and a smattering of kills. See what the next campaign holds in store.

Name: Syno
Rank: Obergefreiter
Unit: 6./JG26
Aircraft: BF-109 E3
Markings: Brown 10
Aerodrome: Marquise
Status: KIA
Victory Claims: Shortly after the engagement started, I lost sight of my Wingman Rook due to heavy warping. After some time and Rook spiraling towards the ground in a burning coffin, Malek took over the lead, with whom I rejoined soon after. Malek got jumped by two Spitfires and I came to help him, scaring the Spits off of his back for the moment. Despite my (admittedly minor) advantage in speed, that made me the target for the two Spits, which closed in at a frightening pace. Now it was Maleks turn to help me out, and he tried, but it was already too late, since it only took one of the Spits two short bursts, to set me on fire and completely disabling all of my maneuverability. There truly are more enjoyable situations, than facing two 100 Octane Spits in an E3