this is an info thread for TF5 (if it ever arrives) and two squadrons very dear to me which flew around the Tobruk area at the time. 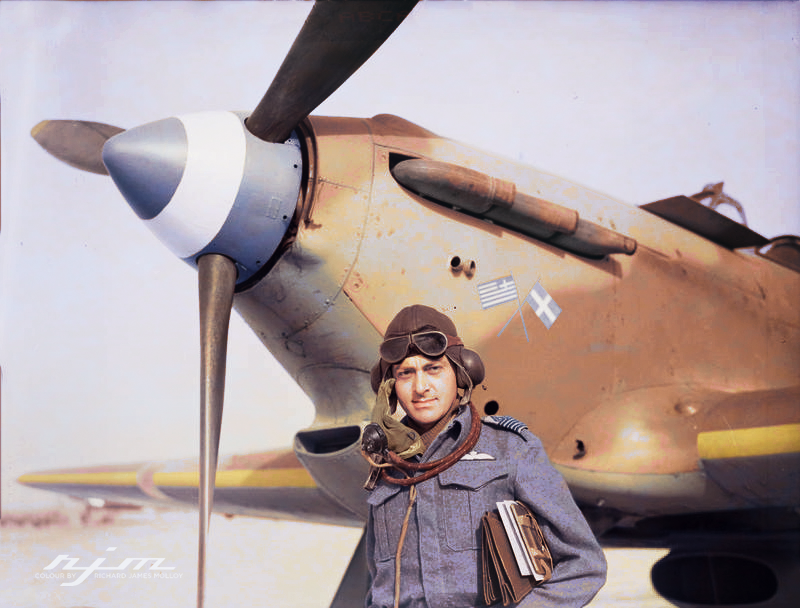 Major Xenophon Varvaresos, Commanding Officer of No. 335 (Greek) Squadron, in front of a Hawker Hurricane at Aqir, Palestine

In April 1941, the German Wehrmacht overran Greece. The Greek government under King George II fled to Allied-controlled Egypt, where it began to establish expatriate Greek Armed Forces. These were formed out of personnel that had been evacuated from Greece or fled to the Middle East during the Occupation, and were equipped and organised along British lines, coming under British command. They had also been formed from Greeks who migrated to Egypt or were born in Egypt before the War.

The 335th Royal Hellenic Pursuit Squadron (335 Βασιλική Ελληνική Μοίρα Διώξεως, 335 Β.Ε.Μ.Δ.), designated within the British Royal Air Force as No. 335 (Greek) Squadron, was formed on 10 October 1941 at Aqir airfield in Palestine. Its first commander was Squadron Leader Xenophon Varvaressos, and the personnel was provided from a core of Greek pilots who were undergoing training in Iraq, augmented by others who had fled from Greece. Initially it was equipped with the Hurricane Mk I, and employed while training in defensive duties until January 1942. Subsequently, the squadron was transferred to El Daba in Egypt, where it was declared as fully operational on 12 February 1942. The squadron began operations over the Western Desert, where it operated continuously until late 1942, participating in convoy protection, bomber escort and ground attack roles. Between June and September 1942, it was re-equipped with Hurricane IIBs. Under Squadron Leader Ioannis Kellas, the squadron participated in the air operations of the Second Battle of El Alamein; on 28 October 1942, the second anniversary of the Italian invasion of Greece, the squadron organized a strafing attack on the Italian XX Corps headquarters, an operation that was a huge morale booster for the expatriate Greeks.

In the aftermath of the Allied victory, the squadron returned to shipping protection duties, while being outfitted with the newer Spitfire Mk Vb and Vc aircraft from December 1943 onwards. On 15 September, the squadron was moved along with its sister unit (No. 336) to the Italian theatre, from where it carried out operations primarily over occupied Yugoslavia

No. 335 (Greek) Squadron was based out of the following fields throughout the war: 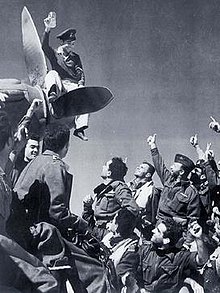 Members of the squadron celebrating the successful bombing of the Italian XX Corps headquarters, Oct. 28, 1942. 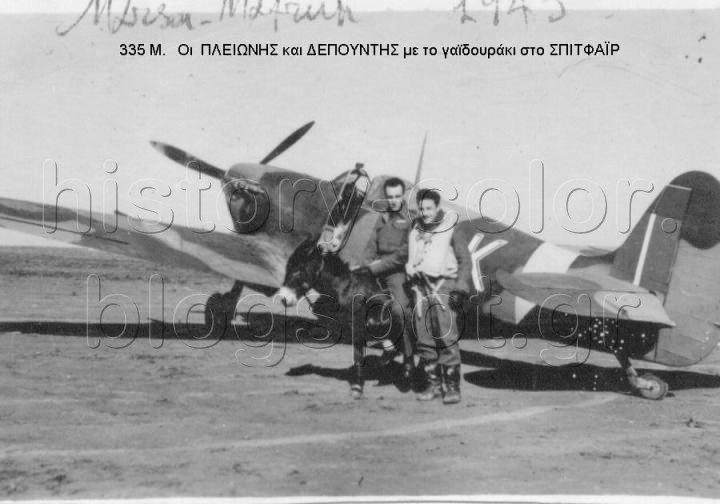 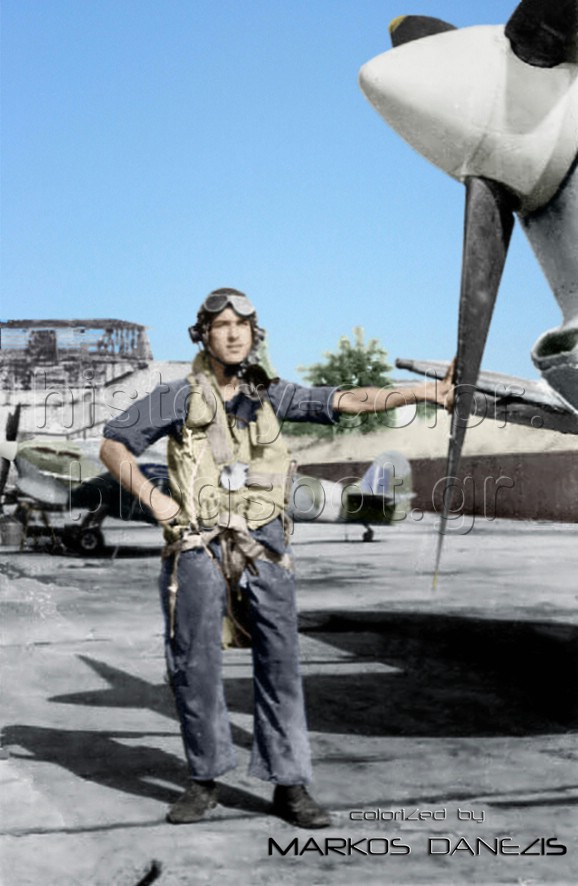 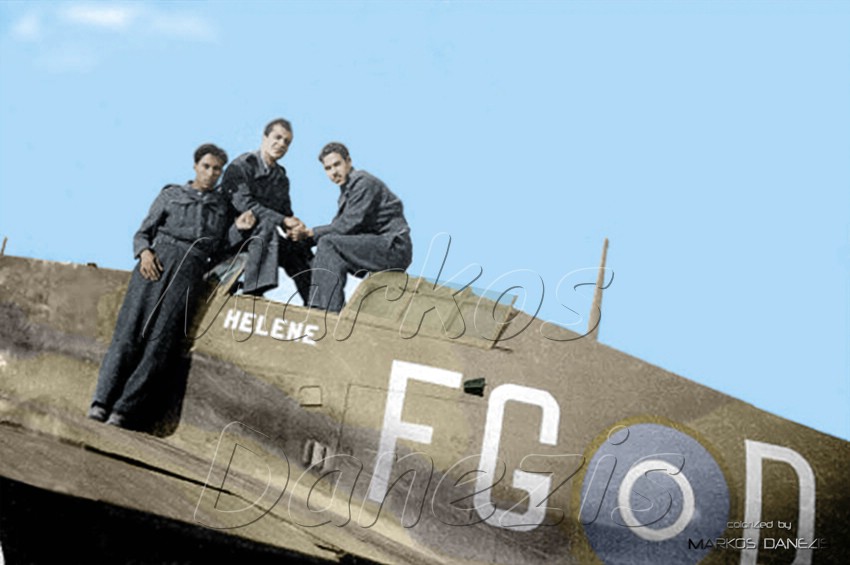 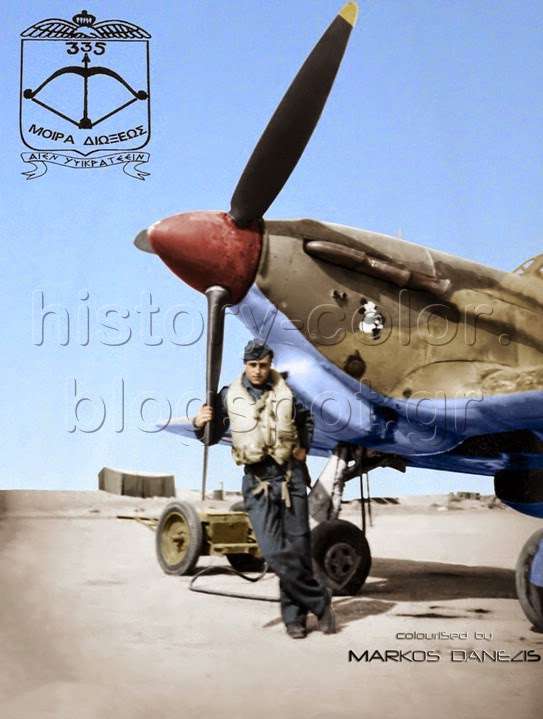 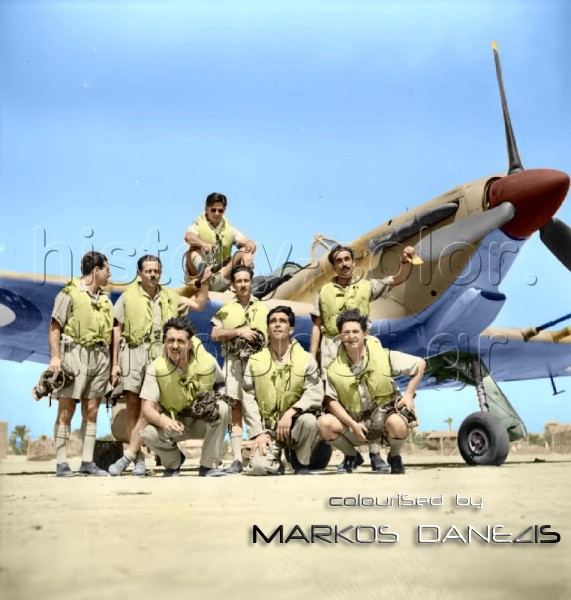 Hawker Hurricane Mk.IIc, 335th Sq., R.H.A.F. A group of pilots of No. 335 (Hellenic) Squadron RAF pose in front of one of their recently-received Hawker Hurricane Mark IICs at Dhekeila, Egypt. (πηγη - source : IWM ) 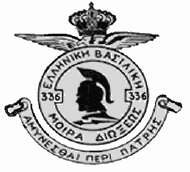 The 336th Royal Hellenic Pursuit Squadron (336 Βασιλική Ελληνική Μοίρα Διώξεως, 336 Β.Ε.Μ.Δ.), designated within the British Royal Air Force as No. 336 (Greek) Squadron, was established on 25 February 1943 at LG 219. Equipped with 21 Hurricane Mk IIc aircraft and under the command of Flight Lieutenant Spyridon Diamantopoulos, it counted many veteran pilots from 335 Squadron in its ranks. This allowed the unit to quickly begin operations: its first combat mission was carried out on 1 March, and the unit was declared operational on 11 April. It was subsequently employed in shipping protection and air defence duties along the Libyan coast, as well as fighter sweeps. The squadron received its first six Spitfire Mk Vc aircraft on 12 October, and over the month of November it participated in several Allied raids against Crete. Although successful, these missions involved great danger from the German air defence and the Luftwaffe, and resulted in several losses. By March 1944, the unit had been completely re-equipped with Spitfires, and on 15 September, the squadron was moved along with its sister unit to the Italian theatre, from where it carried out operations primarily over occupied Yugoslavia. The Greek Prime Minister, George Papandreou (third from right) and the Greek Air Minister, M Fikioris (second from right), accompanied by Air Commodore G W Tuttle, Air Officer Commanding Air Headquarters Greece (seventh from right), and other Allied officers, inspects a line of Supermarine Spitfire Mark Vs and pilots of No. 336 (Hellenic) Squadron RAF during an official ceremony at Kalamaki/Hassani to welcome Greek units serving with the Allied Air Forces back to their homeland. No. 337 Wing RAF, of which Nos. 335 and 336 (Hellenic) Squadrons RAF and No. 13 Squadron, Royal Hellenic Air Force formed part, arrived in Greece on 16 November 1944, and continued operations there until its disbandment on 15 June 1946, after which the Greek squadrons were transferred to Greek control.

Hurricane IIc flown by the Greek pilots of Νο. 336 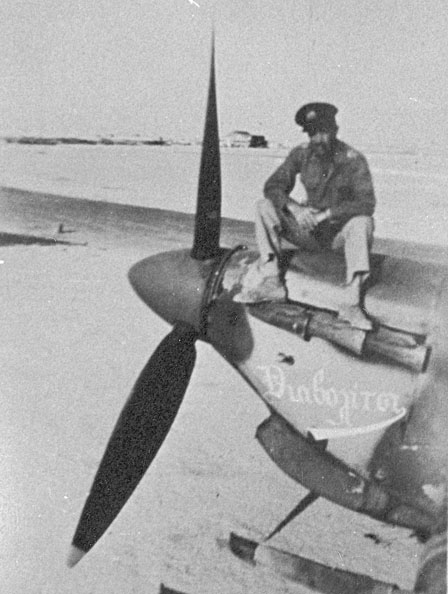 Hellenic Aircraft Squadrons inspection, from the political leadership in November 1944, at the airport Hasani - Hellinikon. 336th Sqn. R.H.A.F. First from the left is Demetris Voutsinas and on the right is Eustathios Athanasopoylos. 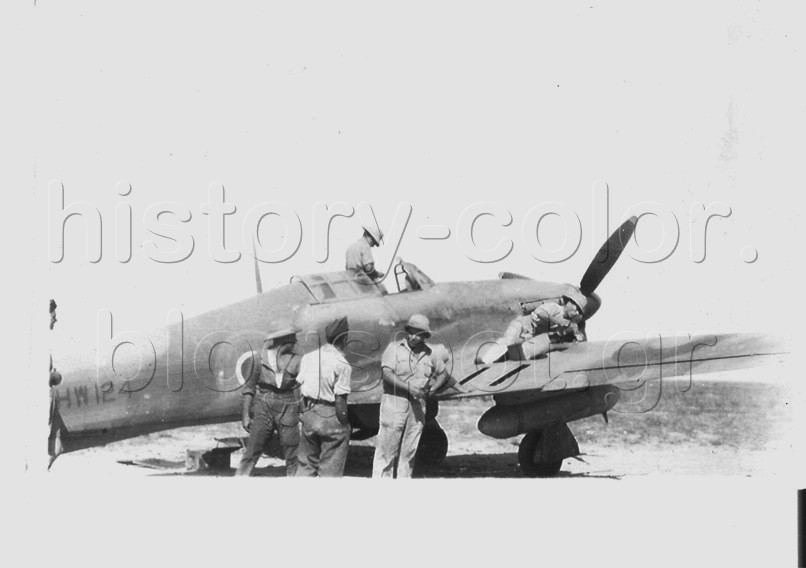 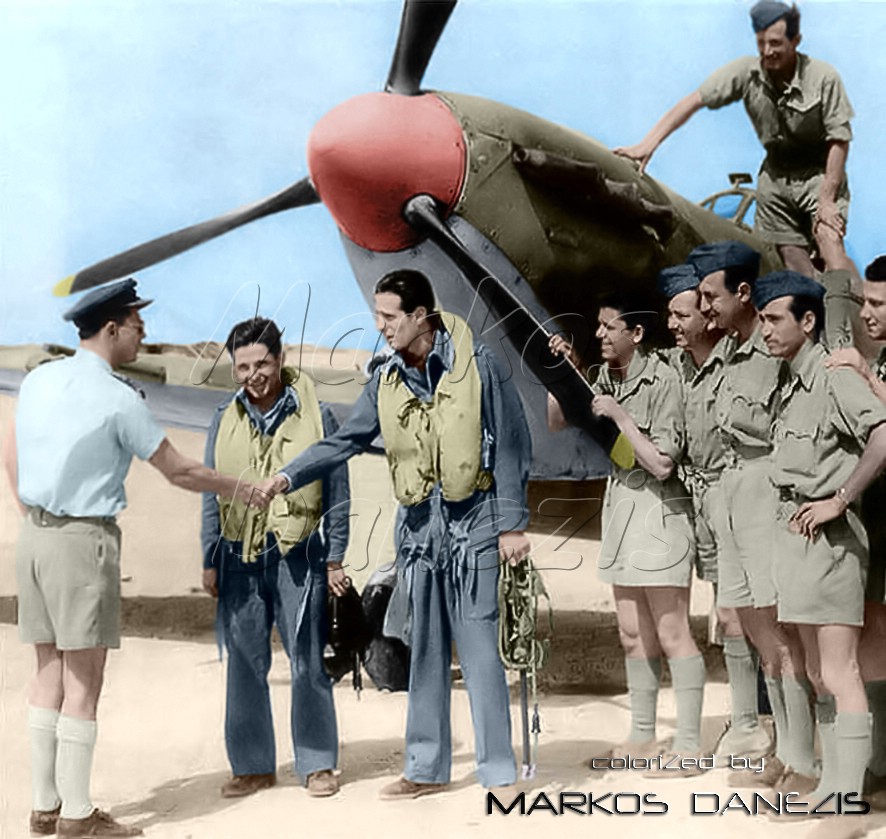 Squadron Leader of No. 336 squadron K. Margaritis congratulates second lieutenant G. Tsotsos and warrant officer D. Soufrilas on their shooting down of a german Ju-88. 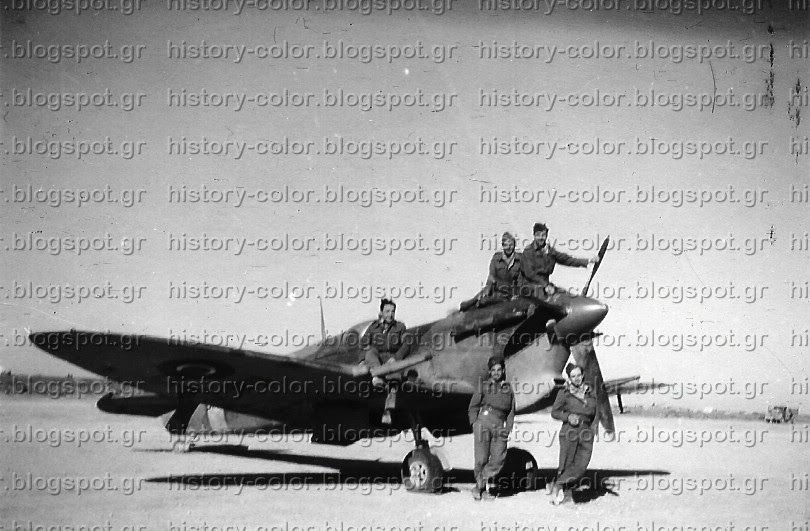 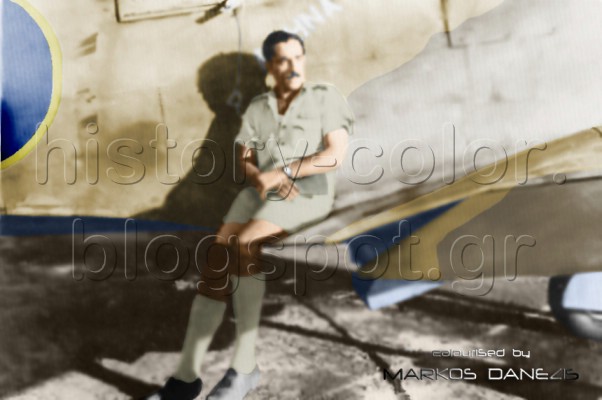 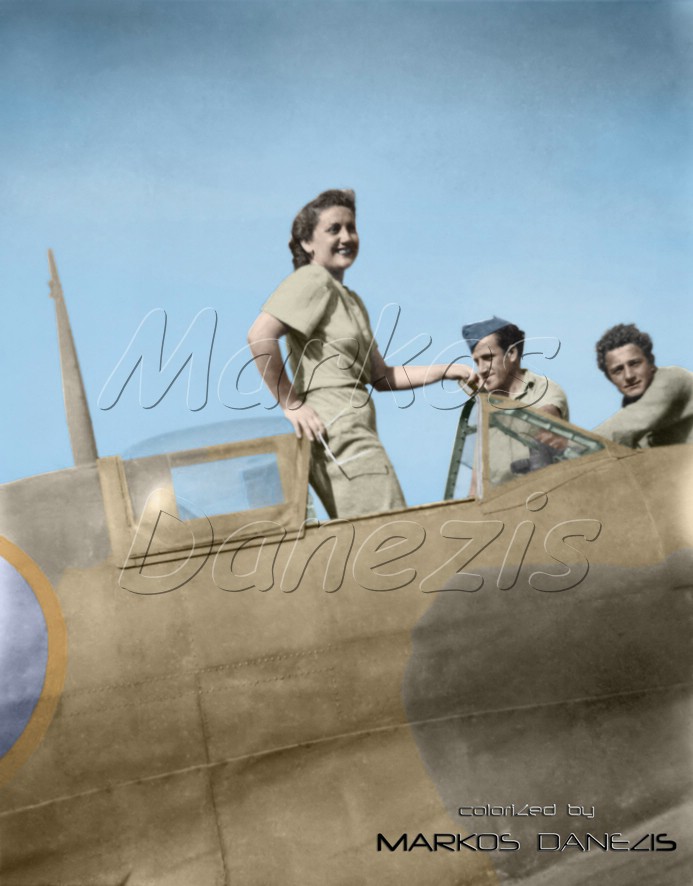 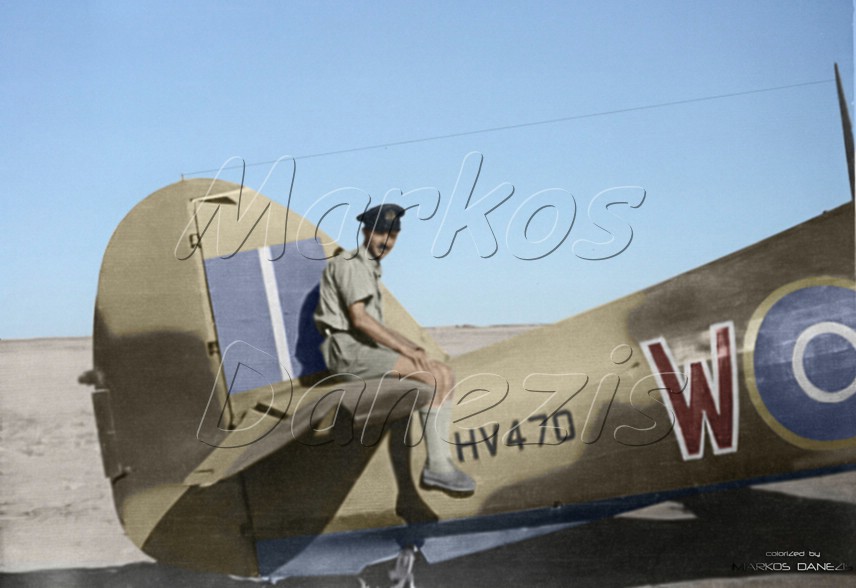 In November the Greek squadrons returned to liberated Greece, where they were engaged in operations against the remaining German garrisons in the Aegean islands and Crete. On 31 July 1945, the squadron was disbanded from the RAF and transferred to Greek control. The motto of the 335 Squadron Αίεν Υψικρατείν ("Always dominate the Heights") is now the official motto of the Hellenic Air Force.

And here is a test CloD skin I made a while back for the No. 335 Other paintschemes. All paintschemes for these squadrons are widely debated as to their accuracy.

Think nothing of it sir, it was the least I could do, a quantity I specialize in.
Top
Post Reply
2 posts • Page 1 of 1